St. Ildesphonsus was born into a royal Visiogothic family,  is famous for having written De perpetua virginitate Mariae contra tres infideles (The Perpetual Virginity of Mary Against the Heretics), and became a huge proponent of Spanish mariology. From his early youth, Ildelephonsus pursued the monastic life. Later he became Archbishop of Toledo in A.D. 657 after having been abbot of the Agli monastery and deacon of the holy Church. He participated as a signatory of the 8th and 9th Councils of Toledo. Of interest here is his last chapter in De perpetua wherein he writes on consecration to the Blessed Virgin Mary. In this portion, “Ildephonsus pronounces a genuine act of self-giving or consecration to the Blessed Virgin, in which he closely connects fidelity to God with fidelity to Mary, service to God with service to the Mother of God, obedience to God with obedience to Mary. He calls her ‘cooperatrix’ in her own redemption” (Mary In The Middle Ages, Gambero – page 31) . Who would have thought that in the 7th century, a well-respected and equally venerated Saint (by both Eastern Orthodox & Roman Catholics) would have such a view as akin to St. Louis De Montfort. Our beloved Saint writes: 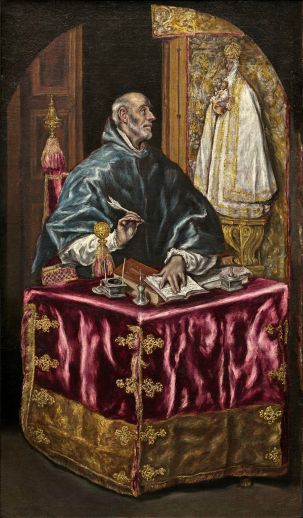 For what he wrought in redeeming me, he formed in the reality of your person. To become my Redeemer, he became your Son. To become the price of my redemption, his Incarnation took place from your flesh. From your flesh He took a body that would be wounded, that he might heal my wounds. He drew forth a mortal body from your mortal body, that he might take away my death. He took from you a body that he assumed without sin, in which he would erase my sins. He humbled himself and assumed my nature from your real body. He was my forerunner, bringing my nature into his kingdom to dwell amid the glory of the Father’s throne, establishing it higher than the angels.

Therefore, I am your servant, because your Son is my Lord. Therefore, you are my mistress, because you are the handmaid of my Lord, because you, my mistress, became the mother of my Lord. Therefore I have become you servant, because you have become the mother of my Maker. I pray you, I pray you,  O holy Virgin, that I might possess Jesus from that same Spirit by whom you gave birth to Jesus. Through that Spirit, through whom your flesh conceived Jesus, may my soul accept Jesus. By that Spirit, by whom you were able to know and give birth to Jesus, may I be granted to know Jesus. In the Spirit, you professed yourself, to be the handmaid of the Lord, desiring that it be done to you according to the angel’s word; in that same Spirit , may I, a lowly man, speak lofty things of Jesus. In the Spirit, you adore Jesus as your Lord and look upon him as your Son; in that same Spirit may I love Jesus. May I show reverence to Jesus; just as he, though he was God, was submissive to his parents”