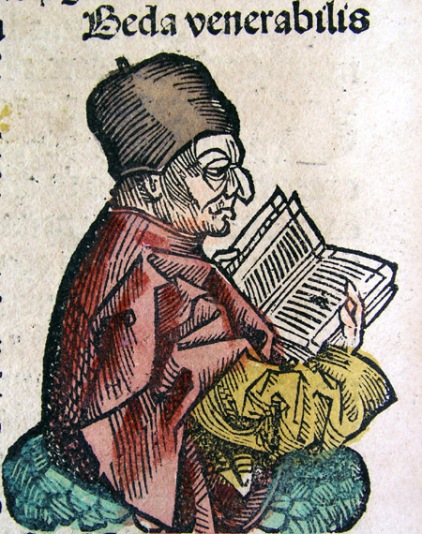 At the age of 7, a young English boy was committed to the care of a Benedictine Abbots, St. Benedict Biscop and Ceolfrid, and was both educated and raised in the Monastic life. Throughout these years of growing up, St. Bede the Venerable was entrenched in the Holy Scriptures, the chanting of English Catholicism, and observed strict Monastic discipline. He died in 735 as a saint in the Lord’s body. Below are two citations from his writings on the Blessed Virgin Mary.

“Following the example of the blessed ever-Virgin Mary, who was married and at the same time unstained, the Church conceives us as a Virgin by the working of the Holy Spirit; she gives birth to us as a Virgin without birth pangs; and as a woman married to one person but impregnated by another, throughout her individual parts that make her one and catholic, she remain visibly united to the legitimate [Roman] Pontiff set over her, but she increases in number by the invisible power of the Holy Spirit”  (In Lucam; PL 92, 330B)

“Now a most excellent and salutary custom has arisen in the holy Church: daily Mary’s hymn is sung by all, together with the psalms of evening praise, so that a renewed remembrance of the Lord’s incarnation enkindles the hearts of the faithful to feelings of devotion and a more frequent meditation on the example of the Lord’s Mother makes them strong, firmly established in the virtues” (In Visitatione B.M. – PL 94, 22A)