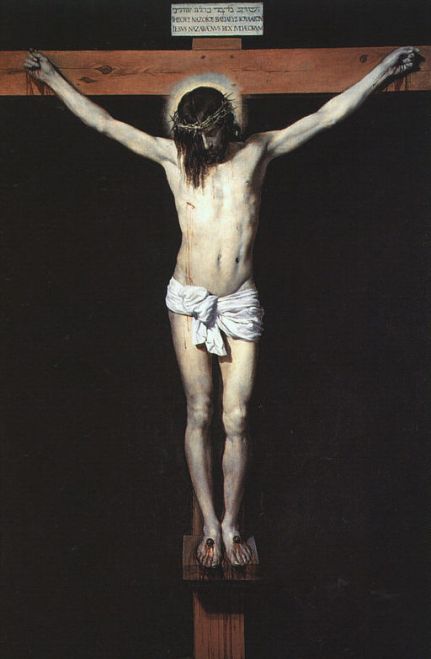 A rather gifted Catholic apologist, Jimmy Akin, has just released an article entitled “Did God Punish Jesus on the Cross“? This, of course, was not meant to be an exhaustive argument against “Penal Substitution“, but I have a few comments to make on this which are related, and after writing them out, I realized they were deserving of an article form.

In the first place, it appears to me that when Mr. Akin says “penal sub“, he means the idea that God the Father breaks up his perfect union of charity in the Holy Spirit with His Son in order to inflict upon him hatred and damnation. If that is what he means, then sure, such a belief is completely contradictory to the Gospel. I can’t read his mind, and the article doesn’t make clear one way or the other. Today we hear many Catholics, especially Eastern Orthodox, rightly rejecting this idea as a Protestant heresy, but do not adequately give, in turn, a valid interpretation of something akin to Penal Substitution. After all, the Scripture does say that Christ became a curse for us (Gal 3). It would seem many wish to say that Christ’s crucifixion was merely an event with ontologically overcomes death for human nature, leaving all notions of punishment to abstractions or language-devices. This is popularly known as the Christus Victor atonement model. A tendency exists to want to relegate atonement to idea of medicine and nature-repair, particularly in the modern East.

Therefore, the reader of Akin’s article is left with more questions than answers. How did Christ pay our debt? He paid it with His blood. That is the constant teaching throughout the ages. We might want to theologize on this in the way St. Anselm or St. Thomas Aquinas do, which says that Christ’s humbling Himself to be a slave and then being hoisted upon the cross to die an ignominious death out of charity for His Father and the human race merits an infinite value which cancels out the infinite demerits of sins of the world. But it remains that he *died*, and specifically for the reason to bear our curse (Gal 3) in order to satisfy divine justice. As far as I’m concerned, this is the Patristic teaching, and it is beautifully articulated in St. Alphonsus Liguori’s “The Passion and Death of Jesus Christ“, from which I will link in the comments, and will provide a few snippets, and some commentary, below.

“…the first was the annual ceremony of the scape-goat, which the High-Priest represented as bearing all the sins of the people, and therefore all, loading it with curses, drove it into the desert, to be the subject of the wrath of God. This goat was a figure of our Redeemer, who was willing to load himself with all the curses deserved by us for our sins; being made a curse for us, in order that He might obtain for us the divine blessing” (Pg. 230)
“Thus all the wrath of God, which He had conceived against our sins, poured itself out upon the person of Jesus Christ; and thus we must interpret what the Apostle said, ‘He was made a curse for us’; that is, the object of all the curses deserved by our sins” (Pg. 247)
Now, one might interject, “Did Jesus suffer all the abandonment of God the Father that was deserved for us our sins, such as despair, utter depravity in sin, and the complete withdrawal of God’s love?” Absolutely not, and St. Alphonsus explains this in the below passage, but notice that he also is not afraid of speaking of what Christ *did* suffer as being assimilated to the penal consequences that are deserved for *our* sins, and it is for these reasons I think, at times, we go too far in completely removing from Christ’s atonement the aspect of a Penal Substitution.

“St. Leo writes that this cry [My God, My God, why have you forsaken me?] of the Lord was not a lamentation, but a doctrine, because he thus desired to teach us how great is the wickedness of sin, which, as it were, compelled God to abandon His beloved Son without a comfort, because he had taken upon Him to make satisfaction for our sins. At the same time, Jesus was not abandoned by the divinity, nor deprived of the glory which had been committed to his blessed soul from the first moment of his creation; but he was deprived <<*of all sensible relief by which God is wont to comfort his faithful servants in their sufferings; and he was left in darkness, fear, and bitterness, pangs which were deserved by us*>>. This deprivation of the sensible consciousness of the divine presence was also endured by Jesus in the Garden of Gethsemani; but that which He suffered on the cross was greater and more bitter. O Eternal Father, what offence had this Thy innocent and most obedient Son ever given Thee, that Thou shouldst punish him with a death so bitter? Look at him as he hangs upon this cross, with his head tortured with

thorns, as he hangs upon three iron nails, and is supported by his own wounds! All have abandoned him, even his own disciples, all deride Him upon the cross, and blaspheme him; and why hast Thou abandoned Him, who hast so greatly loved Him? We must understand that Jesus had taken upon Himself the sins of the world, although he was Himself the most holy of all men, and even sanctity itself; since He had taken upon Himself to satisfy for all our sins, he seemed the greatest of all sinners; and having thus made Himself guilty for all, he offered Himself to pay the price of all. Because we had deserved to be abandoned forever in hell to eternal despair, therefore he chose to be given up to a death deprived of every relief, that thus He might deliver us from eternal death” (Pg. 291-92)

Notice particularly how on one hand, Christ does not become the object of God’s eternal wrath in hell with all the deprivation of God and holiness possible, which is what the damned of humanity will received, and yet on the other hand St. Alphonsus insists that Christ does experience *something* which is juridically deserved by us for our sins. In this way, it becomes clear that, at least for St. Alphonsus, there is a certain assimilated penal substitution going on in the passion and suffering of Christ, however much temporal it is. Moreover, we cannot limit this suffering merely to bodily pains, but also to pains of the soul, as mentioned.
Lastly, I leave a brief message for the Protestant brethren who may be reading. Do not think that by circumscribing the suffering and pains of our Lord to the temporal sphere of the physical and spiritual (i.e. what he suffered in his mind), thereby rejecting the idea of Christ suffering the eternal wrath and hatred of the Father, that we belittle the suffering of Christ, or the value of His holy atonement. The value of Christ’s suffering is not *so much* with regard to how much he gets hammered down with pains, but rather it derives from the infinite value of His holy, eternal, infinite, and beautiful Person as the Creator God who made all things; who was, and is, and is to come. It was this God who created us and has sustained our being in and through all our disobedience that hangs there on the cross being treated like a dead pig, who satisfies the payment for our sins *with His love* (attended to with penal substitutionary elements). It is therefore the *will* and *charity from that will*, which redeems us, being God Himself moved to immeasurable love for sinners. It is the beauty and merit of this charitable obedience (Rom 5:19) that the Father credits with the infinitude that covers over human sin. In fact, this charitable will is the very worship of Christ to the Father that is reproduced in the holy sacrifice of the Mass, but that would deserve a completely new article.

4 thoughts on “Did God Punish Jesus on the Cross? A Second Look”